At 38 meters “Platinum” is one of Australia’s most luxurious ships. Designed by Alan Muir and built in Launceston by Jack Macceddie from Macceddie Marine to Lloyds specs.

I was asked by Jack to fly down to Launceston and design both MTU Detroit main engine exhaust and 3 x Caterpillar generator exhaust systems. The hull was virtually bare at this stage except for a fire system cylinder mounted on the starboard side, approx midships. Well, would you believe, this happened to be the best position for one of the main engine mufflers.

So after mentioning this to Jack, I was politely told to f#^k o*f and come up with something else! After measuring up for the day and working closely with the Lloyds surveyor, I returned a few months later to install all five systems. All steel bulkhead penetrations were lined with a specially designed fibreglass sleeve to prevent corrosion. The exhaust systems were all installed to plan, was sea trialled some months later with perfect results delivered. The main engine exhaust outlets were positioned in such a way that a venturi was created providing premium noise attenuation and very low exhaust temperatures. Jack was very appreciative, great to work for, and a true gentleman!

I have bumped into Jack at the odd boat show and from all reports everything is going well. This was technically a difficult job but made easier by close collaboration with the builder and having a clear understanding of his expected outcome. It was e very challenging but enjoyable project from my point of view, and great to be in Launceston for a week working on “Platinum”.

Read about the Latest News 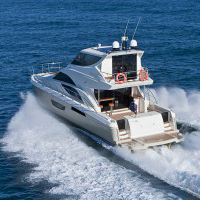